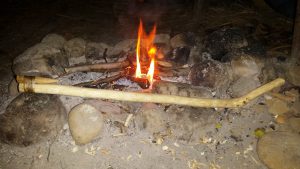 Atlatl, sinew drying by the fire. Ways of the Earth.

The atlatl was a marked improvement on the spear. It allowed the user to throw a lighter spear much longer distances and with much greater force. Following are some photos and video links to see how the atl atl works!

Atlatls come in a variety of forms, the one consistent is the hook on the end into which the dart is set. The rest is the variety of handholds. The dart lays along the atlatl and a snap of the wrist launches the dart, essentially lengthening the arm which increases the dart’s momentum.

Here are some links to YouTube videos that demonstrate the at atl in action.