One of the book reviews implies that I think guns are bad and only primitive weapons are good. I didn’t explain the reasoning in depth in the story, but it is a good distinction for a survival situation so I thought I’d provide a comparison. First, I don’t believe guns are bad. They can be crucial in hunting and protection. When they become problematic is in a scenario such as in the book. First, guns require bullets and a time will come when you run out. With all primitive weapons- bows, crossbows, atlatls…you can make additional ammunition as they are broken, lost or ruined. As long as there is nature, you will not run out of ammunition. A good compromise is a commercial hand held crossbow. You have the convenience of a “hand gun” but you can replace the darts and string if you have the appropriate skills.

The other critical difference is that guns are loud. If you are in a stealth situation, the firing of a gun will give away your location- and that you have resources. This could put you in more danger- or prevent you from hunting when you need to because of concerns about giving up your location. I also love a story Tom Brown Jr. shared about indigenous people in South America who were provided rifles for hunting monkeys. The hunter shot a monkey and immediately returned the gun. The European didn’t understand why- saying, “it’s great, you got the monkey.” The indigenous man replied, “with bows we would have gotten many monkeys. The gun was so loud it scared all the others away.”

So I have no moral problems with guns. i just believe that in a wilderness survival situation as described in the book, guns would be an unnecessary liability for those with the skills to make and use primitive weapons. With no more practice than it takes to effectively use a gun, you can learn to hunt with a primitive weapon. With a bit more work you can learn to make your own so you are never left feeling unarmed. 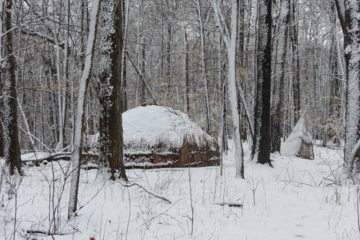 Lessons from my first Long-term Shelter When we began Ways of the Earth Living Museum in Indiana, we each planned to build our own long-term shelter, and each needed to be different so our guests Read more…

Winter is the time for Cordage

Living in a shelter with only fire and lamps for lighting, not to mention the short days, winter can be quite dark. Cordage is the perfect skill to work during the winter months. The same Read more…

One thing people often neglect when considering survival living is food storage and preservation. It all sounds so easy- dry it, smoke it, make containers for it…but each has its own challenges and learning curve. Read more…